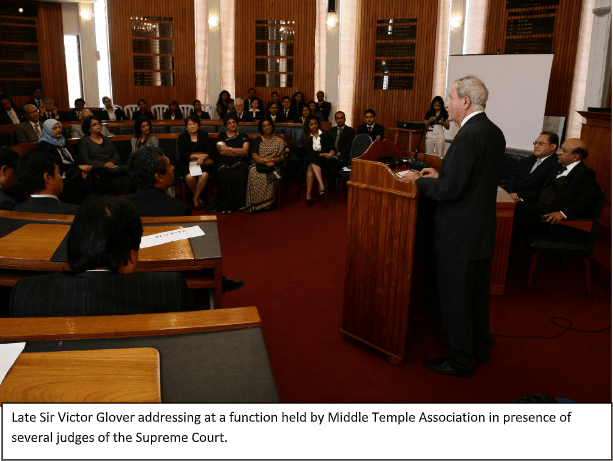 We have learnt the sad news of the demise of late Sir Victor Glover on 2nd February 2020.Until recently he was fit and active professionally. The funeral took place in the presence of a huge crowd of families, friends and personalities of different walks of life held at Notre Dame de Lourdes and   clearly manifests the deep sense of love, affection for him and loss to the family, judiciary and Mauritius.    I consider it my privilege to have known him since I have joined the Bar in 1971 and witnessed his ascending judicial career at different jurisdictions and positions held.

He had a brilliant academic record as from the primary and secondary school when he became a laureate.  He read law at Oxford University and was called to the “Honourable Society of Middle Temple” in 1957.  He joined the Attorney General Office in 1962 after having practised at the Bar.  He served in different capacities including that of Parliamentary Counsel.  He held several posts and became judge of the Supreme Court at the age of 44.  In 1982 he became Senior Puisne Judge and Chief Justice in 1988 till he retired in 1994.  In 2010 he was appointed, amongst other responsibilities, as Chairman of Presidential Commission of Prerogative of Mercy .

He was elevated as Bencher of Honorable Society of Middle Temple (UK). The Middle Temple Association (Mauritius) founded in 2008 was lucky to have Sir Victor Glover as our first Honorary President.  Since then I used to interact with him regularly and he was eveready to extend his advice and guidance.  He had a rich and accomplished career and he will be remembered by all those who had known him in whatever capacity as a highly respectable and respected person with great sense of humanity, humility and simplicity. I remember having met him at the Market   and he confided to me “Unless you carry regularly “tente bazaar” you will never have the experience of ground reality of the common man to dispense effective justice.”  It became clear from his judgment that he was more concerned with the principles of fairness and justice in the application of the Law.

Socrates described the attributes of a good judge as follows “to hear courteously, to answer wisely, to consider soberly and to decide impartially.” Sir Victor held all these qualities .  The present generations of all those involved in administrations of justice are privileged to find in him a role model par excellence and a source of inspiration. He never believed that to be effective and efficient one has to be stern, aloof and authoritarian.  Sir Victor had “Les pied sur terre, la tête sur les épaules, le Cœur rempli d’humanisme”.

He will always be remembered for his jurisprudential contribution,  his quiet dignified disposition and his passionate commitment for justice.   Sir Victor Glover wrote in one of the Association Magazine the following  “And why should not our effort bring about a desire by members of the other Inns of Court to follow suit?  That can only be for the improvement of fellowship and good relations between all the members of the Mauritius Bar.” It is a great loss to the legal fraternity Judiciary and the Republic of Mauritius.

The Middle Temple Association extends to the entire bereaved family our heartfelt sympathies especially to my good friends Gavin and Brian.  The vacuum created by his loss will be felt not only by his family but by the whole judiciary.

May his soul rest in peace. 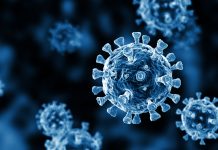 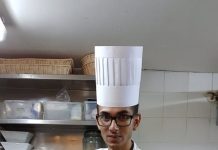 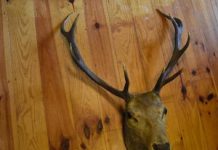 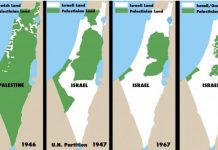 THE UNTOLD SIDE OF PALESTINE